Researchers at Aalto University in Finland have successfully realized extremely thin metallic graphene nanoribbons (GNRs) - only 5 carbon atoms wide. The team demonstrated fabrication of the GNRs and measured their electronic structure, with results that suggest that these extremely narrow ribbons could be used as metallic interconnects in future microprocessors. 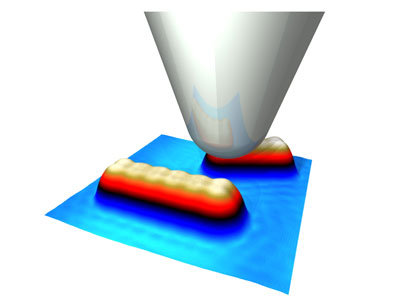 GNRs have been suggested as ideal wires for use in future nanoelectronics: when the size of the wire is reduced to the atomic scale, graphene is expected to outperform copper in terms of conductance and resistance to electromigration - the typical breakdown mechanism in thin metallic wires. However, previously demonstrated graphene nanoribbons have been semiconducting, which hampers their use as interconnects. Now, the researchers have shown that certain atomically precise graphene nanoribbon widths are nearly metallic, in accordance with earlier predictions based on theoretical calculations.

The team used scanning tunneling microscopy (STM) to probe the material’s structure and properties. Findings showed that ribbons longer than 5 nm exhibit metallic behavior. The nanoribbon fabrication is based on a chemical reaction on a surface, where the precursor molecule exactly determines the width of the ribbon. To get a one-carbon-atom-wide ribbons, one simply has to pick a different molecule.

The experimental findings were complemented by theoretical calculations. The theory predicts that when the width of the ribbons is increased atom-by-atom, every third width should be (nearly) metallic with a very small band gap. Quantum mechanics stipulate that making a system smaller also increases the band gap. Graphene, however, can work differently due to its extraordinary electronic properties.

These results open the door to using graphene in future electronic devices, where these ultra-narrow ribbons could replace copper as the interconnect material. Future studies will focus on all-graphene devices combining both metallic and semiconducting graphene nanostructures.