University at Buffalo (UB) researchers have developed a novel 3D printed water-purifying graphene aerogel that could be scaled for use at large wastewater treatment plants. 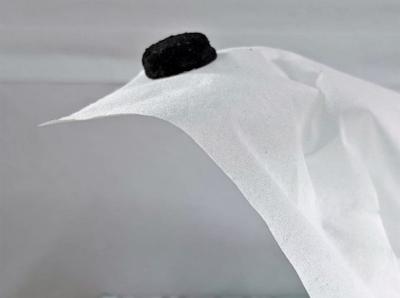 Composed of aerogel graphene and two bio-inspired polymers, the novel material is reportedly capable of removing dyes, metals and organic solvents from drinking water with 100% efficiency. Unlike similar nanosheets, the scientists’ design is reusable, doesn’t leave residue and can be 3D printed into larger sizes. The team now plans to commercialize its design for industrial-scale deployment.

“The goal is to safely remove contaminants from water without releasing any problematic chemical residue,” explained study co-author and assistant professor of environmental engineering at UB, Nirupam Aich. “The aerogels we’ve created hold their structure when put into water treatment systems, and they can be applied in diverse water treatment applications.”

Scientists have been experimenting with assembling nanosheets into macroscopic aerogels, lending them a higher absorption capacity and making them more retrievable. However, such graphene aerogels are, according to the UB team, rarely deployed within treatment facilities due to processing restrictions, that prevent them from being incorporated into industrial purifying reactors, columns and filters.

By contrast, Direct Ink Writing (DIW) offers users precise control over the size, shape and architecture of parts produced, while the process’ repeatability makes it highly scalable. Already, 3D printing has been deployed to create thermal, energy and biomedical graphene devices, so the Buffalo team believes that it could be used to develop a mass-manufactured water purifying system as well.

In order to produce aerogels quickly and consistently, the researchers first needed to create a graphene-based ink, with the properties to allow water absorption while preventing particle agglomeration. To achieve this, the Buffalo team added the bio-inspired polydopamine (PDA) and bovine serum albumin (BSA) to a GO powder, resulting in a novel viscoelasticity-optimized 3D printing material.

Leveraging a retrofitted Ultimaker 2 GO 3D printer, the researchers then fabricated a 12 mm (D) x 4 mm (H) cylindrical test sample, before freezing and freeze-drying it, leaving a G-PDA-BSA aerogel. During subsequent testing, the team repeatedly exposed their material to organic solvent loaded-water, as a means of assessing its contaminant removal capacity.

On each occasion, the graphene aerogel was able to remove 100% of the solvents, while reducing colored dye contamination by up to 20%. In later design iterations, the scientists even managed to reconfigure their aerogel, so that it could root-out heavy metals like lead and chromium, alloys that remain difficult to remove at current water decontamination facilities.

With further development, the scientists believe that their scalable approach could also be applied to create other functional reusable nanomaterials, with potential end-use applications at water filtration plants in the form of devices such as adsorbents, reactors or filters.