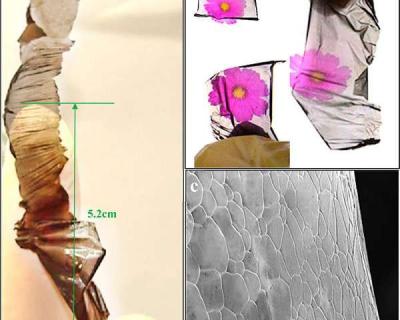 The improved performance is mainly based on the prism-like graphene building blocks that the FFT-GP is made of. The hollow structures of the graphene that give the material its transparency also provide additional space for chemical reactions to occur compared to other materials. Also, the aligned and interconnected prism-like structures provide a wide open path for ions and electrons to travel along and the good charge transport leads to an overall better performance.Making the new material was not without its challenges. The researchers were faced with one of the biggest obstacles facing the synthesis of thin, transparent graphene sheets - the fact that the sheets fracture easily when being removed from their template. For that, the researchers used NaCl powder as the template for FFT-GP growth. Using a method called microwave plasma-enhanced CVD, the researchers created a "plasma atmosphere" of NaCl, carbon, and hydrogen. At the end of this process, the NaCl is allowed to recrystallize on a silicon substrate. These NaCl crystals serve as templates upon which graphene fragments form and grow into prism-like graphene that can be peeled off the substrate.

While the FFT-GP seems as bit wrinkled and has a slightly alarming color, the researchers demonstrated that it can withstand more than 1,000 bending and stretching cycles with little capacity loss and still transmits light. The researchers also demonstrated a tandem device made of two integrated FFT-GP-based supercapacitors placed over a smartphone screen (to demonstrate transparency) that lights up an LED.

The material's combination of flexibility, transparency, electrical conductivity and large surface area may be beneficial for many applications, like stretchable and transparent solar cells, rolled-up displays, and self-powered and wearable optoelectronics. The hollow structure of the prism-like graphene could also be exploited for other uses, such as storing more light-absorbing dye in dye-sensitized solar cells. The researchers plan to explore these possibilities in the future.