Talga Resources has reported a milestone moment in a sea trial of its Talcoat graphene coating. 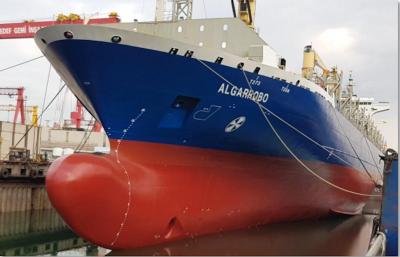 The company initially developed the graphene coating as an alternative to traditional coating methods that incorporate harmful chemicals and materials and first applied Talcoat to the hull of a ship back in late 2019 as part of a sea trial to test the coating’s robustness out in the tough ocean environment. A second application on a separate vessel followed soon after, and both trials remain ongoing.

The first ship, named Robin 1, recently underwent its 15-month inspection and, according to the company, the graphene coating is continuing to match or improve upon the commercial standard.

In particular, the company noted corrosion marks on a section of the ship covered with an industry-standard coating, which do not appear on the Talcoat section.

Talga is still waiting to hear back about how its coating has performed on the second vessel.

The good news from Robin 1 has prompted the company to double-down on the product's applications. To that end, Talga will develop the coating for use in anti-foul marine coatings, barrier coatings for packaging, anti-bacterial coatings for metals and plastics, and anti-corrosion coatings for large volume metal parts.

Talga Managing Director Mark Thompson said he was very pleased to see this large-scale demonstration of Talga's graphene successfully working in tough commercial shipping conditions. “Additionally, as we can now produce our graphene as a by-product of our battery anode manufacturing process, we are demonstrating a global leading low-cost and scalable graphene additive supply for large-volume industrial products," he added.