Australia-based advanced materials technology company, Talga Resources, has reported outstanding conductivity results from its Talphene-enhanced epoxy composite trials undertaken at TWI in the UK. Carbon fiber reinforced polymer (“CFRP”) panels were constructed using a dispersion of Talga graphene (Talphene) in the epoxy-based resin of the composite and subjected to a range of conductivity tests pertinent to aircraft applications. 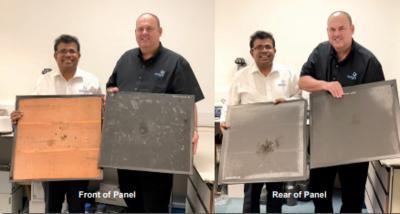 As CFRP resins are normally non-conductive, these results are said to be highly positive. The ability to improve the weight, electrical and thermal conductivity of CFRP composites has significant benefits for applications such as lightning strike protection and wing anti-icing on aircraft, both of which currently use heavy copper mesh. The same technology would also be of benefit to wind turbine blades that require manual or chemical de-icing in winter.

Talga will now progress its products in the composites market using these prototype test results as the catalyst to initiate joint development and commercial agreements with global end users.