Researchers at Stanford University developed a new battery technology based on graphene and aluminum. The stanford team claims that their aluminum battery has a number of advantages over lithium: it's flexible, can be charged in a minute instead of hours and is very durable. it's also cheaper and non-reactive (meaning compromising it will not result in sparks like lithium batteries). 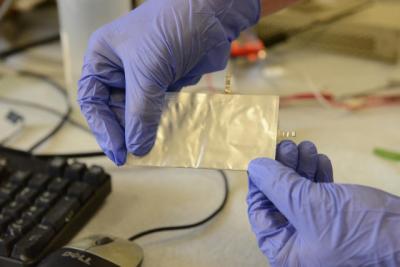 The scientists used graphene foam (made by creating a metal foam, then catalyzing graphene formation on its surface) as cathode material and aluminum foil as the anode. The electrolyte the researchers used was a solution of aluminum trichloride dissolved in an organic solvent that also contained chlorine. While this granted better performance (7,500 cycles, much more than the 1,000 expected from a Li-ion battery), the voltage provided by an aluminum-ion battery is only about half of that what you'd get from a lithium-ion cell. Also, the overall power density (the amount of power you can store in a battery in relation to its size) is still insufficient.

There are, in fact, applications where power density is not paramount - electrical storage on the grid, for instance, so this type of batteries can already find uses in the market if produced economically. In order to compete with Lithium batteries, however, significant improvements will need to be achieved