» A spotlight on the EC's graphene-enhanced composites...

Scientists at the UK's University of Sunderland are leading Task 10.11 – Composites for Automotive, part of the European Commission’s Future and Emerging Technology Flagship. The project is exploring how graphene could be used to create lighter, stronger, safer and more energy-efficient applications and parts for the automotive market. 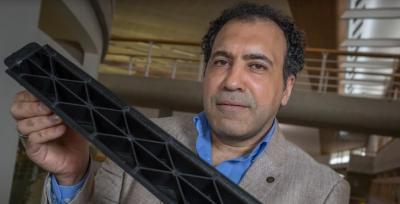 The University of Sunderland is leading a consortium of five research partners from Italy, Spain and Germany that have been conducting a series of tests with support from Centro Ricerche CRF of Fiat Chrysler Automobiles over the last two years. Graphene was embedded into a polymer and mixed with traditional carbon fiber or glass fiber structural material, to test as the bumper of a car, and allowed the researchers to reduce the thickness of the structural components.

The team stated: “The results we discovered in the first stages are significant; we achieved a lot more than we ever anticipated. The material is very light and very strong and the impact testing we did showed a 40% higher specific energy absorption than in traditional composite materials. It’s also more stable; it’s a controlled fracture when you hit it, even at a higher velocity, it absorbs the energy in a controlled way. We expected this at the beginning but did not expect the results to be this high.”

“Getting the right balance between the graphene and the polymer is crucial. The composite cannot be too weak, or so strong that it’s unable to absorb energy in the event of a collision. Modern cars are designed to crumple in a crash – protecting the passengers – whereas a composite that is too strong would transfer energy to the car’s passengers, compromising their safety. We have a very good uniform dispersion now, but it’s not an easy task. We need to make it lightweight and at the same time very safe".

The team is already in talks with automotive manufactures and their tier 1 suppliers, who are reportedly very interested in this work and its future applications.