» Rice U team demonstrates a graphene-CNTs hybrid that...

Researchers at Rice University have created a rechargeable Li-ion battery, based on a hybrid of graphene and carbon nanotubes, with three times the capacity of commercial lithium-ion batteries. This was achieved mainly by addressing a major challenge known as the dendrite problem. 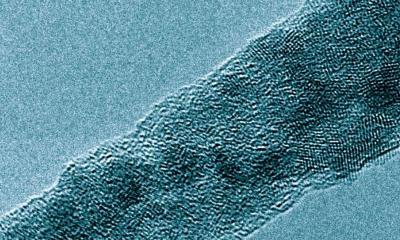 The Rice battery stores lithium in a unique anode made of a seamless hybrid of graphene and carbon nanotubes. The material (first created at Rice in 2012) is basically a 3D carbon surface that provides abundant area for lithium to occupy. The anode itself is said to approach the theoretical maximum for storage of lithium metal with its 3,351 milliamp hours per gram capacity, while resisting the formation of damaging dendrites or "mossy" deposits.

Dendrites are lithium deposits that grow into the battery's electrolyte. If they bridge the anode and cathode and create a short circuit, the battery may fail, catch fire or even explode. This issue has sabotaged many attempts to replace lithium-ion with advanced lithium metal batteries that last longer and charge faster.

The Rice team found that when the new batteries are charged, lithium metal evenly coats the highly conductive carbon hybrid in which nanotubes are covalently bonded to the graphene surface. The hybrid replaces graphite anodes found in common lithium-ion batteries. The new anode's nanotube forest, with its low density and high surface area, is said to have abundant space for lithium particles to slip in and out as the battery charges and discharges. The lithium is evenly distributed, spreading out the current carried by ions in the electrolyte and suppressing the growth of dendrites.

To test the anode, the Rice lab built full batteries with sulfur-based cathodes that retained 80% capacity after more than 500 charge-discharge cycles. Electron microscope images of the anodes after testing showed no sign of dendrites or the moss-like structures that have been observed on flat anodes. To the naked eye, anodes within the quarter-sized batteries were dark when empty of lithium metal and silver when full, the researchers reported.

"Many people doing battery research only make the anode, because to do the whole package is much harder," Prof. Tour, the team leader, said. "We had to develop a commensurate cathode technology based upon sulfur to accommodate these ultrahigh-capacity lithium anodes in first-generation systems. We're producing these full batteries, cathode plus anode, on a pilot scale, and they're being tested."

In January 2107, researchers at Rice University found that it may be possible to make graphene-carbon nanotube junctions excel at transferring heat, turning these into an attractive way to channel damaging heat away from next-generation nano-electronics.