Scientists from Rice University have managed to embed metallic nanoparticles into their previously-developed LIG (laser-induced graphene, a flexible film with a surface of porous graphene made by exposing a common plastic to a commercial laser-scribing beam), that turn the material into a catalyst for fuel cells and various other applications. 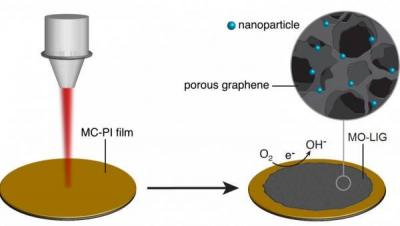 The researchers have now found a way to enhance the product with reactive metals and turn it into "metal oxide-laser induced graphene" (MO-LIG), a new candidate to replace expensive metals like platinum in catalytic fuel-cell applications in which oxygen and hydrogen are converted to water and electricity. The scientists state that a major advantage of this process is that commercial polymers can be used, with the addition of inexpensive metal salts. They are then subjected to the laser scriber, which generates metal nanoparticles embedded in graphene. In effect, the laser generates graphene in the open air at room temperature.

The resulting composites contain less than 1% metal and perform as 'super catalysts' for fuel-cell applications. Other methods to do this are much more complicated and require expensive metals and carbon precursors.

Initially, the researchers made laser-induced graphene with commercially available polyimide sheets. Later, they infused liquid polyimide with boron to produce laser-induced graphene with a greatly increased capacity to store an electrical charge, which made it an effective supercapacitor. Their latest tweak included mixing the liquid and one of three concentrations containing cobalt, iron or molybdenum metal salts. After condensing each mixture into a film, they treated it with an infrared laser and then heated it in argon gas for half an hour at 750 degrees Celsius. That process produced robust MO-LIGs with metallic, 10-nanometer particles spread evenly through the graphene. Tests showed their ability to catalyze oxygen reduction, an essential chemical reaction in fuel cells. Further doping of the material with sulfur allowed for hydrogen evolution, another catalytic process that converts water into hydrogen.