Researchers from the Warwick Manufacturing Group (WMG) at the University of Warwick, together with members from the Imperial College London, have enhanced three hybrid flow cells with the use of nitrogen doped graphene - graphene sheets exposed to nitrogen plasma - using a binder-free electrophoresis (EPD) technique. 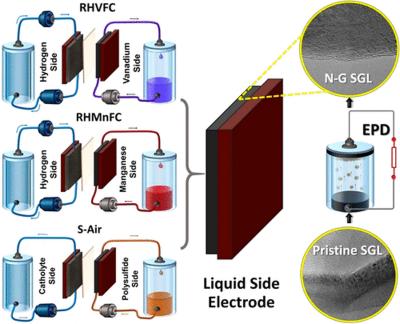 The new technique could potentially promote wider acceptance and renewable energy sources - such as hydro and solar power - currently limited by intermittency problems that prevent mass adoption of these sources into larger, national-scale power grids. One idea explored in working around this limitation is the use of long-duration battery technologies, like redox flow batteries. However, despite its longevity and performance, current costs have become significant tradeoff considerations and also hampers widespread adoption.

The team, in its recent work, details a new way of improving hybrid flow batteries. Also known as regenerative fuel cell (RFC) technology, these batteries are believed to store electricity for longer periods of time at only about a fifth of current energy storage technology. Additionally, these batteries have flexibility in positioning and have virtually zero environmental footprint.

In their new technique, researchers used carbon-based electrodes with cost-effective electrolyte materials like naturally abundant sulfur or manganese. They used a simple yet effective electrophoretic deposition (EPD) method that introduced carbon nanomaterial additives (via the nitrogen-doped graphene). This greatly improves the durability and performance of electrodes, even in highly acidic or alkaline environments.

"This EPD technique is not only simple but also improves the efficiencies of three different economical hybrid flow batteries thereby increasing their potential for widespread commercial adoption for grid-scale energy storage," said Dr. Barun Chakrabarti, one of the lead authors and a WMG research fellow.

The researchers noted that compared to other battery technologies, such as lithium-ion batteries, the hybrid flow batteries in the study only has a total chemical cost of about 1/30th. Scaling up this new technology would allow storage of electricity from renewable sources from several days up to entire seasons, at lower costs than currently possible. Furthermore, the new batteries can be used for grid-scale power applications - credited to its design flexibility and its unique capability of sizing its power independent of its energy capacity.

Hybrid flow batteries, especially those that use the S-Air or polysulphide/ air system, have an energy density that is 500 times greater compared to pumped hydroelectric storage. Its compact design allows it to be placed virtually anywhere near the source of generated power.