Scientists at Rice University and the University of Houston have developed a catalyst that can simplify the splitting of water into hydrogen and oxygen to produce clean energy. The electrolytic film is a three-layer structure of nickel, graphene and a compound of iron, manganese and phosphorus. The foamy nickel gives the film a large surface, the conductive graphene protects the nickel from degrading and the metal phosphide carries out the reaction. 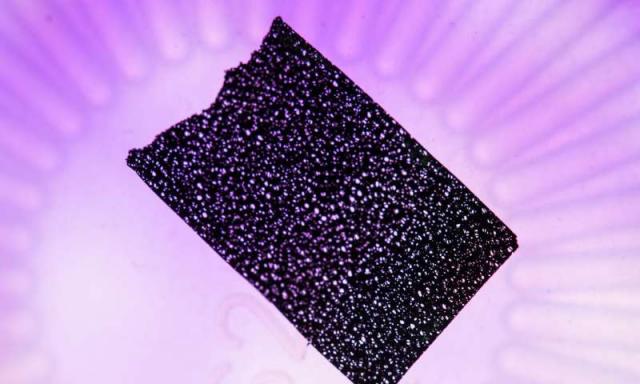 The film was developed to overcome barriers that usually make a catalyst good for producing either oxygen or hydrogen, but not both simultaneously - as is often the case with regular metals. The team explained that normally, a hydrogen evolution reaction is done in acid and an oxygen evolution reaction is done in base. This work produced one material that is stable whether it's in an acidic or basic solution. In addition, the team used rather common materials in lieu of the usually-required platinum and other costly materials.

The new catalyst also requires less energy, the team said. The overpotential (the amount of energy required to trigger electrocatalysis) is small, and quite competitive with other materials. The lower it is, the closer you come to making it as efficient as possible for water splitting.

Graphene, the atom-thick form of carbon, is key to protecting the underlying nickel. One to three layers of graphene are formed on the nickel foam in a chemical vapor deposition (CVD) furnace, and the iron, manganese and phosphorus are added on top of that, also via CVD and from a single precursor. Tests compared nickel foam and the phosphide both with and without graphene in the middle and found the conductive graphene lowered charge-transfer resistance for both hydrogen and oxygen reactions. The manganese adds a level of protection as well.

The researchers said the material is scalable and should find use in industries that produce hydrogen and oxygen or by solar- and wind-powered facilities that can use electrocatalysis to store off-peak energy.

It may also be adapted to produce other advanced materials. "Our method could be widely applicable to a large number of metal phosphide materials for catalysts—not just for water splitting, but for a range of things," the scientists said.