Researchers at Japan Advanced Institute of Science and Technology (JAIST) and Otowa Electric, a lightning protection equipment manufacturer, have used graphene as an electric field sensor that can detect both positive and negative electric fields. 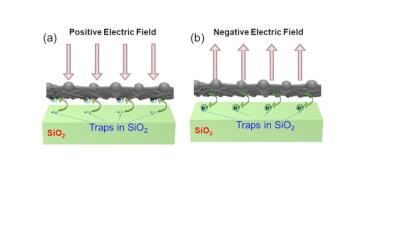 The response of the sensor is recorded as the change in drain current under the application of an electric field. In addition, by systematic analysis, The team established the mechanism of the graphene electric field sensor, which was found to be different from what they expected.

"It is well known that the carrier density in graphene is highly sensitive to external perturbations. Such change in carrier density is reflected in the drain current. Although there was some attempt and proposal to use graphene as an electric field sensor, none of the previous works established the underlying mechanism of electric field sensing in graphene. We realized that it is vital to establish the mechanism first to make any improvement in the sensor, which became our primary goal." says Senior Lecturer Manoharan Muruganathan.