Researchers from the Chinese Academy of Sciences (CAS), the University of Science and Technology of China and Tianjin University have enhanced the energy storage capacity of graphene supercapacitors via solar heating. 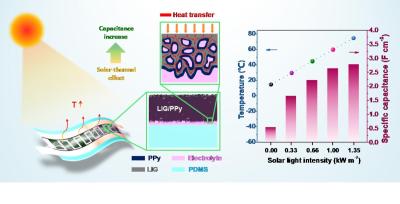 In low temperature environments, the hindered diffusion of electrolyte ions can restrict the electrochemical performance of supercapacitors. Electrode materials with solar-thermal properties are expected to provide a new strategy to solve this problem. However, it remains a challenge to develop electrode materials with both excellent solar-thermal properties and high energy storage capacity.

In their recent research, the team prepared graphene films with three-dimensional porous structures using laser-induction technology. They composited the polypyrrole uniformly composited into the graphene network by pulse electrodeposition. Graphene/polypyrrole composite electrodes were obtained and a new type of solar-thermally enhanced supercapacitor was constructed.

"After the temperature of electrodes was raised, the optimized pore structure and the increased electrolyte ion diffusion rate increased the energy storage capacity by 4.8 times. In addition, since the solid electrolyte was well protected, the capacitance retention rate of the supercapacitor was still as high as 85.8% after 10,000 times of charging and discharging," said Dr. LI Nian, a member of the team.