A team of researchers from Russia, UK, Japan and Italy has created a graphene-based terahertz detector. 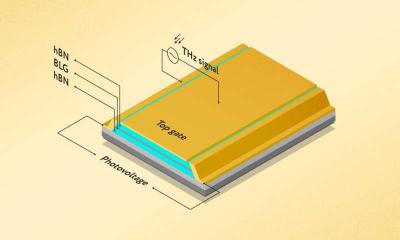 The team explains that the reason for the inefficiency of existing terahertz detectors is the mismatch between the size of the detecting element, the transistor—about one-millionth of a meter—and the typical wavelength of terahertz radiation, which is about 100 times greater. This results in the wave passing the detector by without any interaction.

It was proposed in the past that to address this issue, the energy of an incident wave could be compressed into a volume comparable to the size of the detector. For this purpose, the detector material should support a special type of "compact waves" called plasmons. They represent the collective motion of conduction electrons and the associated electromagnetic field, not unlike the surface sea waves moving together with the wind as a storm sets in. In theory, the efficiency of such a detector is further increased under wave resonance.

Implementing such a detector proved harder than anticipated. In most semiconductor materials, plasmons undergo rapid damping—that is, they die down—due to electron collisions with impurities. Graphene was seen as a promising way out, but until recently, it was not clean enough.

The authors of the research presented a solution for the long-standing problem of resonant T-wave detection. They created a photodetector made of bilayer graphene encapsulated between crystals of boron nitride and coupled to a terahertz antenna. In this sandwich structure, impurities are expelled to the exterior of the graphene flake, enabling plasmons to propagate freely. The graphene sheet confined by metal leads forms a plasmon resonator, and the bilayer structure of graphene enables wave velocity tuning in a wide range.

The team has developed a compact terahertz spectrometer, several microns in size, with the resonant frequency controlled via voltage tuning. The researchers have also shown the potential of their detector for fundamental research: by measuring the current in the detector at various frequencies and electron densities, plasmon properties can be revealed.

"Our device doubles up as a sensitive detector and a spectrometer operating in the terahertz range, and it's also a tool for studying plasmons in two-dimensional materials. All of these things existed before, but they took up a whole optical table. We packed the same functionality into a dozen micrometers," said co-author Dmitry Svintsov, who heads the Laboratory of 2-D Materials for Optoelectronics at the Moscow Institute of Physics.