A research team from the Paul Scherrer Institute in Switzerland and Sapienza University in Rome developed a new loud speaker that is driven by a light signal - and without electricity. The idea is to use modulated light that shines on a 3D graphene sponge. The audio is achieved via a highly-efficient photo-mechanism.

The researchers say that unlike conventional loudspeakers, this high-fidelity photo-speaker does not rely on vibrations to produce the sound - and it does not need any type of electrical connection or complicated system for sound generation. Using an optical pulse train, this loudspeaker allows a completely digital operation for frequencies from acoustic to ultrasound.

The researchers believe that this highly efficient new way to covert light to sound could find applications not just in high-end speakers, but also in radiation detectors and medical devices. 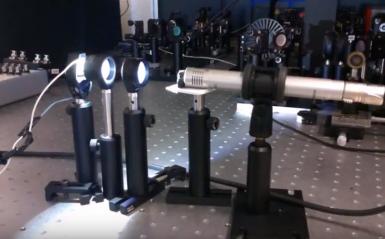 Graphene has been proven to be a promising material for various audio applications. One of the earlier initiatives in this area was presented in 2011 when researchers from Seoul's National University developed a transparent and lightweight speaker made from Graphene. In 2013 researchers demonstrated that a graphene-based speaker can outperform even the best commercially-available earphones.

In November 2016 it was reported that Xiaomi's latest Piston 3 Pro earphones make use of a graphene membrane. In that same month, Israeli audio pioneer Waves Audio announced that it is going to develop an innovative electrostatic speaker using a nanoscale active membrane based on graphene in collaboration with the Virginia Polytechnic Institute and State University.

Since then we have seen several graphene-drivers based earphones hit the market, including China-based FiiO Electronics FiiO F3, Zolo's Liberty wireless earphones and CKCOM's wireless earbuds. Even Apple is seemingly interested in graphene speakers.

Wuxi JCNO Materials, a company located in the Wuxi Graphene Industry Zone in China, has created a graphene-based electrostatic speaker. Electrostatic speakers sound by vibrating the diaphragm before and after with the action of electrostatic force. It can capture the extremely small changes in the music signal to fully show the nuances of the music. This kind of speaker has already been used in applications like cars, theaters and exhibitions.

Another interesting company in this field is ORA, a Canada-based early-stage start-up that develops a graphene oxide-based composite material, dubbed grapheneQ used to create speaker drivers.