Researchers from Northwestern have developed graphene-enhanced self-healing coatings on metal surface based on oil. Jiaxing Huang, professor of Materials Science and Engineering at Northwestern, explains: “the unusual part is that the oil coating does not drip, sticks very well, and at the same time can rapidly heal when scratched. Such coatings can protect metal surface from highly corrosive environments.” 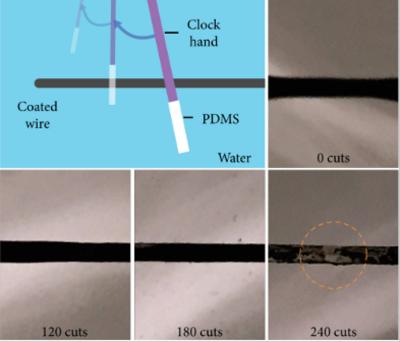 The self-healing material was achieved by modifying an oil with lightweight hollow particles in the form of tiny graphene capsules, measuring just tens of microns in size. These capsules form a network in the oil, preventing the oil film from shrinking or dripping. However, they still allow oils to flow when a scratch breaks the network, thereby healing the damaged area. In a proof of concept demo, the researchers showed that the material is able to heal repeatedly. Even after being scratched in the exact spot for nearly 200 times in a row, it was still able to return to its former un-visibly damaged state within seconds.

But while Huang describes this as a “very interesting lab discovery,” he warns against premtaure enthusiasm. That’s because it’s so far only been demonstrated on small-sized samples, such as metal plates or on wires. Provided that there is no problem when scaling it up, though, one possible real-world application could include emergency underwater repair of coatings on metal structures - since the modified oil can be brushed directly onto metal underwater. It might also be useful as a temporary anti-corrosion solution for metals which are going to be placed into highly corrosive environments.

“We are interested in [the] anti-fouling properties of such coatings,” Huang said, describing possible next steps. “We also wish to broaden the scope of suitable lightweight particles or to find ways to mass produce such graphene capsules. This is such an intriguing, yet seemingly simple system [that] we wish to gain much better understanding of why it works so well.”