Researchers from Northwestern University have turned graphene oxide (GO) into a soft, moldable and kneadable "play dough" that can be shaped and reshaped into free-standing, three-dimensional structures. 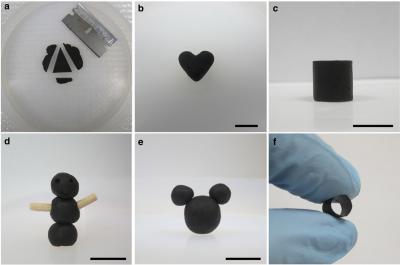 Called “GO dough”, this malleable material is said to solve several long-standing problems in the graphene manufacturing industry. “Currently graphene oxide is stored as dry solids or powders, which are prone to combustion and explosion,” said Jiaxing Huang, who led the study. “Or they have to be turned into dilute dispersions, which multiply the material’s mass by hundreds or thousands.”

Huang explained that a shipment of 5 kilograms of graphene oxide, which currently would have to be dispersed in around 500 liters of liquid, would have to be delivered in a truck. In contrast, the same amount of graphene oxide in dough form would weigh about 10 kilograms - much lighter and easier to transport. This could turn graphene-based sheets into a widely accessible, readily usable engineering material.

Huang’s team made GO dough by adding an ultra-high concentration of graphene oxide to water. If the team had used binding additives, they would have had to further process the material to remove these additives in order to return graphene oxide to its pure form.

“Adding binders such as plastics could turn anything into a dough state,” Huang said. “But these additives often significantly alter the material’s properties.”

After being shaped into structures, the dough can be converted into dense solids that are electrically conductive, chemically stable and mechanically hard. Or, more water can be added to the dough to transform it into a high-quality GO dispersion on demand. The dough can also be processed further to make bulk graphene oxide and graphene materials of different forms with tunable microstructures. Huang hopes that GO dough’s ease of use could help graphene meet its much-anticipated potential as a super material.