Researchers from Leiden University in the Netherlands have shown that graphene floating atop water actually attracts it, meaning it is hydrophilic (given that the surface of the water is clean and smooth). This contradicts a common view that graphene is in fact hydrophobic. 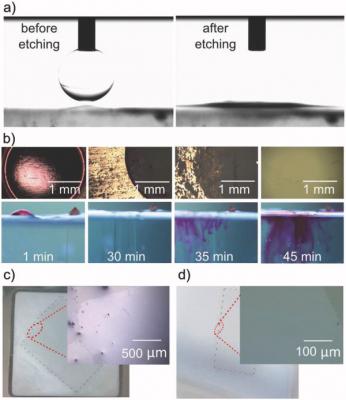 The way graphene is typically engineered, created on metal and placed on a solid support like a silicon wafer, likely contributed to the belief that it is water repellent, the research team said. During transfer, graphene can become damaged or contaminated, which can have an impact on its behavior, a phenomenon that inspired this newly-published research.

To see if the exterior of an intact layer of graphene is hydrophilic, the team placed a droplet of water onto a sample. The team then looked at the curvature of the droplet to see if the graphene surface is water repellent or if it attracts water. Because a "heavy" water droplet can tear the hyper-thin layer of graphene, the researchers used ice or hydrogel to support their graphene sample.

In addition to measuring the contact angle between the water droplet and the graphene layer, the study team also tested other liquids with different polarity. The researchers ultimately concluded that all molecular interactions of the water affect the water molecules in the droplet above the graphene. This result is due to graphene's extreme thinness, and it clarifies why graphene is hydrophilic on water, the researchers said.

The researchers added that their work could have massive implications for the use of graphene in water-oriented applications. Engineers looking to leverage graphene's properties will have to think about a totally new starting point.