A team of researchers from China has reported a novel strategy to 'stitch' together reduced graphene oxide (rGO) nanosheets into ultra-strong, tough, and highly conductive graphene films using only small amounts of cross-linker. They show that the bridging of long-chain π-π bonding agent between neighboring rGO nanosheets can provide substantial improvement in multiple properties including tensile strength, toughness, electrical conductivity, EMI shielding capability, and resistance to mechanical damage. 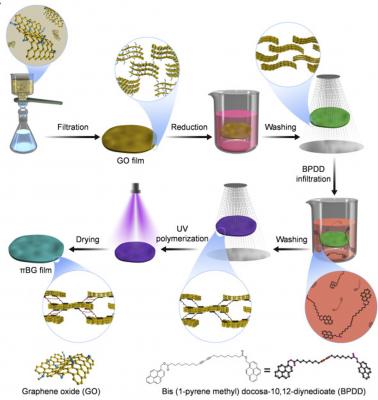 "Our graphene films not only demonstrate a record tensile strength of almost 1.1 GPa, but exceptional abilities to absorb mechanical energy, transport charge, and shield electromagnetic interference that are comparable to or even superior to graphene films annealed at much higher temperatures," says Qunfeng Cheng, a professor at Beihang University in Beijing. "Our process uses abundant natural graphite as a raw material at room temperature. This novel strategy can provide an inspiration for converting low-priced graphite powders into much higher performance macroscopic graphene films for diverse commercial uses in the future."

For this work, the researchers were inspired by the layered structure, sophisticated interface architecture, and growth at ambient temperature of nacre (mother-of-pearl), the pearly internal layer of many mollusc shells. Nacre is an excellent example of an exceptionally tough natural material that exhibits structural robustness, despite the brittle nature of their ceramic constituents.

Cheng notes that numerous high-performance graphene-based nanocomposites have been demonstrated through various interface design strategies in the past. "However, these graphene-based nanocomposites usually show only moderately enhanced mechanical properties at the expense of decreased electrical conductivity due to the addition of insulating cross-linkers, impeding their practical applications," he adds.

In their work, the team demonstrates that long-chain π-bridging can simultaneously enhance the tensile strength, toughness, and electrical conductivity of graphene films. They found that less than 7 wt% content of π-π bonding agent (polymerized BPDD) delivered the best performance results. The resulting films have record values compared with the previously reported graphene-based nanocomposites bridged by various interface interactions under ambient conditions.

Cheng points out that, compared with other interface design strategies, long-chain π-bridging can not only provide highly efficient stress transfer and large slippage space for graphene nanosheets, but also induce alignment of graphene nanosheets, resulting in remarkable electrical conductivity comparable to that of high-temperature annealed graphene films.

These integrated high-performance graphene films could find numerous applications, for instance as structural materials in place of carbon fiber composites in aerospace or for other functional materials in electromagnetic interference shielding, popular portable devices, and wearable electronics.

"In addition," says Cheng, "the strengthening and toughening mechanisms can also give us impetus to overcome the conflict of attaining strength and toughness, two properties that are often mutually exclusive, in structural materials and traditional composites."

Next, the researchers will work to develop a large-scale manufacturing technique to allow the integration of this bridging strategy into commercial applications. In addition, they will continue to develop higher performance graphene films incorporating interface bridging and structure optimization for uses in extreme environments, such as ultrahigh or ultralow temperature.

The properties of the team's graphene films are still lower than those of the single-layer graphene nanosheet, so they will continue their search for solutions to further enhance the tensile strength, toughness, and electrical conductivity of macroscale graphene films for many applications.

In addition, although these graphene films show high performance at room temperature, their performance in extreme environments, such as outer space with intense radiation, and frequent variations of high and low temperatures, will also need to be investigated.

"One main challenge might be how to precisely design interface interactions between adjacent microscale graphene nanosheets to achieve a tensile strength higher than current carbon fiber-reinforced nanocomposites," Cheng concludes.