Researchers from Lawrence Livermore National Laboratory (LLNL) and UC Santa Cruz (UCSC) have designed a technique that could double the performance of 3D printed graphene-based supercapacitors. The new technique involves sandwiching lithium ion and perchlorate ion between layers of graphene in aerogel electrodes—a process which greatly improves the capacity of the electrodes while maintaining the high rate capability of the devices. 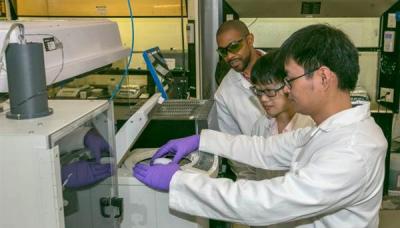 The 3D printing process used by the researchers to build the supercapacitors is a form of direct ink writing, consisting of two ion-intercalation steps before the hydrolysis of perchlorate ion intercalation compounds. According to the team “this two-step electrochemical process increases the surface area of graphene-based materials for charge storage, as well as the number of pseudo-capacitive sites that contribute additional storage capacity”.

Due to the relatively small ion-accessible surface area of the aerogel, which is caused by the aggregation and stacking of graphene sheets, its capacitance is limited. Thanks to the new research, however, that capacitance can now be increased. “This study presents a facile method to boost the capacitive performance of 3D printed graphene aerogel by exfoliating the stacked graphene layers and functionalizing their surface, without damaging structural integrity,” explained the team.

By improving the performance of the 3D printed supercapacitors, the scientists believe that the devices could be used in future custom-built electronics which require supercapacitors with unusual shapes. With 3D printing adding an unprecedented level of customization to consumer electronics, they see no reason why customers couldn’t someday be designing their own smartphones. Those customized electronic devices would then require customized supercapacitors to fit their particular shape and form, with this new 3D printed graphene aerogel devices seemingly fitting the bill very well.