Northeastern University scientists were commissioned by DARPA (Defense Advanced Research Projects Agency) and ARL (Army Research Laboratory) to modify graphene to provide thermal sensitivity for use in infrared imaging devices such as night-vision goggles for the military. In a four-year project set out to do just that, they ended up creating an entirely new material spun out of boron, nitrogen, carbon, and oxygen that shows evidence of magnetic, optical, and electrical properties as well as DARPA's sought-after thermal ones. 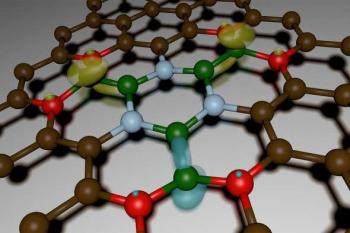 The potential applications of such a material are varied and range from 20-megapixel arrays for cellphone cameras to photodetectors to atomically thin transistors that when multiplied by the billions could fuel computers.

While boron and nitrogen are often recognized as acceptable additions to graphene in various studies to achieve superior properties, the choice of oxygen is more surprising and explained by scientists as more of an inevitability - they tries to get rid of oxygen atoms but were unable to do so, and decided to control its introduction instead.

They discovered that oxygen was behaving in the reaction chamber in a way the scientists had never anticipated: It was determining how the other elements—the boron, carbon, and nitrogen—combined in a solid, crystal form, while also inserting itself into the lattice. The trace amounts of oxygen were, metaphorically, "etching away" some of the patches of carbon, making room for the boron and nitrogen to fill the gaps.

The new material was named 2D-BNCO, and structural as well as functional tests showed that it exhibits some amazing material properties. In fact, as well as the thermal sensitivity DARPA requested, it displays magnetic, optical, and electrical properties unlike those of graphene. The researchers now need to establish if the careful manufacturing conditions can actually be replicated at scale to produce 2D-BNCO in useful-enough quantities.