» New face masks use graphene and electrical charge to...

LIGC Applications has developed the Guardian G-Volt, a face mask with a graphene filtration system that can be sterilized and safely re-used. 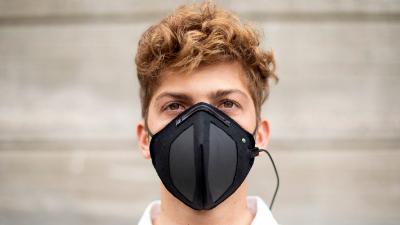 Global interest in protective masks has surged in recent months, due to ongoing coronavirus outbreaks around the world. However, the company, which is based in New York, said it had taken five years to design and test the mask. They are now crowdfunding the project online.

A low level electrical charge will pass through Guardian G-Volt when it is plugged in to a portable battery pack via a USB port. This charge would repel any particles trapped in the graphene mask.

At home, a docking system will allow the mask to be fully sterilized so it can be worn again.

LIGC's CEO stressed that the mask has been in the making for years, and has been tested at both Ben Gurion University in Israel and Rice University in the US.

"The timing of the campaign for us is an alignment of a worldwide need and technology that has come of age," he added. "We are first and foremost scientists and are extremely honored to be able to bring this technology at a time of need."

The graphene in the mask is a kind called laser-induced graphene, a microporous conductive foam that can trap bacteria and conduct the electricity needed to sterilize the mask's surface. It can then be heated and sterilized in the at-home dock. Wearing the mask can also protect against breathing in air pollution.

LIGC Applications will manufacture the laser-induced graphene filters and the masks in Belgium.