The Advanced Technology R&D Center of Mitsubishi Electric Corp. is reportedly developing a graphene-enhanced image sensor that can sense a wide frequency band of light from visible light to terahertz waves with one device. 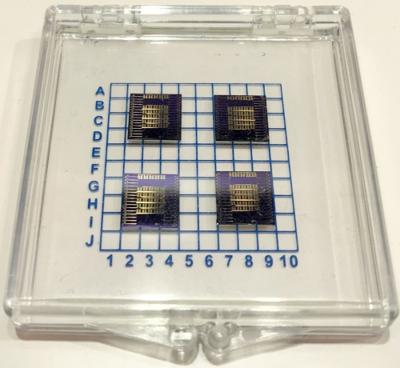 Mitsubishi Electric exhibited a prototype chip at MEMS Sensing & Network System 2018, which took place from Oct 17 to 19, 2018, at Makuhari Messe, in Chiba City, Japan, along with Ceatec Japan 2018. It was developed in a joint research project with the research laboratory of Kazuhiko Matsumoto of the Institute of Scientific and Industrial Research, Osaka University.

In the case of far-infrared sensors used for thermography, elements called "quantum type" have a high performance. But graphene may have an even higher performance than that in terms of response speed and sensitivity. The quantum type generally uses special materials and is cooled to several hundred degrees C below zero to reduce the influence of noise. In contrast, the graphene-based sensor does not need to be cooled.

The Advanced Technology R&D Center expects that the graphene-based sensor will replace all kinds of far-infrared sensors because of multiple excellent properties in the future. Though carbon, which is not used for common CMOS processes, is used for the production of the sensor, the manufacturing process of the sensor itself is a commonly-used process.

The filtering for taking in only light with a specific wavelength can be structurally realized without using an optical method, according to the Advanced Technology R&D Center. Specifically, a bandgap is artificially generated by making graphene have a regular pattern so that the sensor becomes sensitive only to desired wavelengths. Also, there is a method of forming a resonance structure so that the sensor becomes highly sensitive only to lights having specific wavelengths corresponding to resonance frequencies.