Researchers at the King Abdullah University of Science and Technology (KAUST) have created graphene electrodes that function as effective biosensors, by using a laser inscribe patterns into a polymer sheet. The laser scribing technique locally heats parts of a flexible polyimide polymer to 2500 degrees Celsius or more to form carbonized patterns of patches on the surface that act as electrodes. 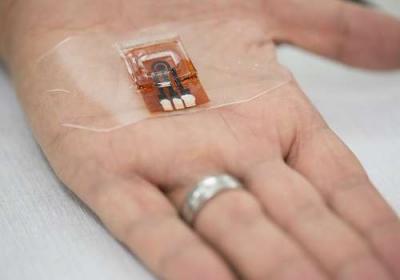 The black patches are about 33-micrometers thick, with a highly porous nature that allows molecules to permeate the material. Inside the patches, the graphene sheets have exposed edges that are effective at exchanging electrons with other molecules. "Graphene-based electrodes with more edge-plane sites are effectively better than those relying on carbon or carbon-oxygen sites in the plane of the material," said a member of the KAUST team.

The researchers added platinum nanoparticle catalysts to one of the electrodes to speed up the electrochemical reactions with other molecules. In experiments with two different test molecules, this electrode could exchange electrons hundreds of times faster than other carbon-based electrodes and showed no loss in performance over 20 cycles of testing.

The team used this graphene-based electrode to build a sensor for three biologically important molecules: ascorbic acid, dopamine and uric acid. When the molecules came in contact with the electrode surface, they release electrons, generating a current proportional to their concentration. Each molecule's electrochemical response was seen at a different voltage, meaning the device could measure their concentrations simultaneously and without interference.

The electrode accurately detected very small (micromolar) concentrations of the molecules, beating several rival electrodes on both sensitivity and the lower limits of detection. The researchers hope to further advance their control and add traces of other atoms, such as nitrogen, to graphene to improve its sensing performance and to augment the electrodes with aptamers, short strands of DNA, RNA or peptides that bind to specific target molecules, to create new biosensors.