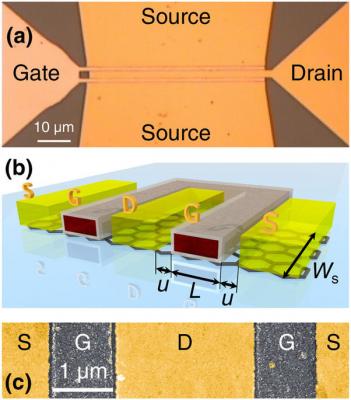 Graphene lack of a bandgap hinders its use in electronics since it causes an inability to switch the transistors off, effectively rendering the “0” state in digital logic inaccessible. However, many analog applications do not require a bandgap; The team explains that the only undesired side-effect of using GFETs in analog circuits is a poor saturation of the drain current, which prevents high-gain operation. The researchers have now succeeded in improving saturation by optimizing the dielectric material (AlOx) that is used to electrically insulate the top gate of the GFET. An improved quality of gate dielectric resulted in strong control over carriers in the graphene channel, yielding overall performance benefits.

“Such GFETs could find applications in analog circuits, in which high gain and operating speed could be traded off against power consumption”, says the leader of the group that performed the research. “Some examples include amplifiers, oscillators, and very simple mixed-signal circuits (e.g., for baseband processing)”, he adds.

As part of the project, the researchers identified critical technological parameters that could be optimized to further improve the maximum oscillation frequency, showing that the proposed improvements are of a technological nature, rather than a fundamental obstacle. The research suggests that a further improvement of CVD graphene quality, smoother substrates, reduced contact and gate resistances should yield devices with even higher real use potential.