Researchers from the Foundation of Research and Technology-Hellas, Patras, Greece and Aristotle University of Thessaloniki, Greece have developed a technique for creating nanopores in CVD grown graphene. The technique is based on femtosecond (fs) laser treatment of graphene. 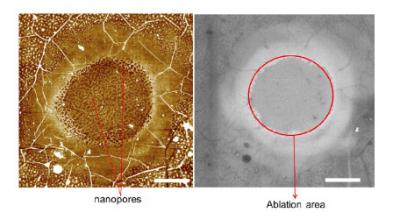 CVD graphene is placed onto Si/SiO2 using conventional dry transferring techniques. Then, it is treated in air with 80 fs laser pulses at high repetition rate. By focusing the barrage of fs laser pulses onto the graphene, circular patterns are formed.

The circular patterns are formed due to the synergy of thermal and ablation effects, occurring in different time scales and affecting different regions of graphene within the spot of the Gaussian beam.

The ablation effects destroy the graphene network forming pores with diameters ranging from a few nm up to 70 nm, an order of magnitude lower than the diffraction limit. Pore diameters and their aerial density are strongly dependent on the laser treatment parameters (laser wavelength, power, focusing, and irradiation time). Yet, thermal effects become important due the high repetition rate of the fs laser, resulting in graphene inflation of a region around the ablation area periphery).

By adjusting focus, laser power and exposure time, the optimization of the nanopore production process can be achieved. The proposed method can be easily scaled up for creating porous graphene membranes in various area scales from μm2 up to m2 provided that the quality of the transferred CVD graphene is exceptional.