Today two different teams of researchers released articles describing new advances in graphene-on-silicon based photodetectors. These devices hold promise because it could lead to more simple device fabrication - and those devices will be very fast compared to current photo detectors and be responsive to a wider range of light frequencies. 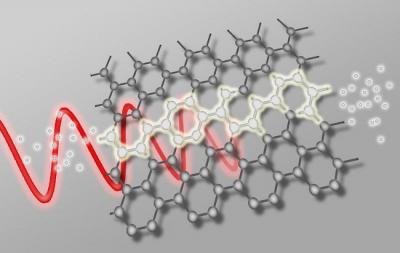 But basic graphene photodetectors suffer from low responsivity as graphene will only convert about 2% of the light passing through it to electrical current. This is a high value for an atom-thick material, but it's not enough for a real photodetector.

First we have a team from MIT, Columbia University and IBM that developed a new graphene-on-silicon photodetector. In this new design light enters the detector through a silicon channel which acts like a waveguide. The graphene is perpendicular to the waveguide and is connected to two gold electrodes in an asymmetrical placement.

The mismatch between the energy of electrons in the metal contact and in graphene creates an electric field near the electrode - which creates a current. In their experiments, the unbiased (no applied voltage) detector generated 16 milliamps of current for each watt of incoming light and its detection frequency was 20 gigahertz. This is competitive with unbiased germanium based photodetectors. With better engineering, their design could yield even better performance.

The second research team comes from TU Vienna and the Kepler University in Linz. They used a narrow waveguide (200 by 500 nanometers) in their design which seems to be pretty similar to the design described above.

The team says that their photodetector is extremely fast and is very compact - suitable for data communication. You could fit 20,000 such detectors in a single chip with a surface area of one square centimeter - so this tiny chip will be able to read 20,000 information channels at once