» Graphene nano-coils could replace solenoids for...

Researchers at Rice University found that graphene nano-coils possess natural electromagnetic properties and can help in scaling down electronics by possibly replacing common solenoids (wires coiled around a metallic core that produce a magnetic field when carrying current, turning them into electromagnets. Solenoids also serve as inductors, primary components in electric circuits that regulate current, and in their smallest form are part of integrated circuits). 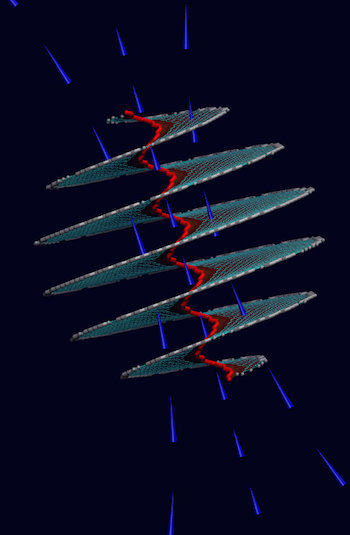 The researchers discovered that when a voltage is applied, current will flow around the helical path and produce a magnetic field, as it does in macro inductor-solenoids. These graphene coil-structures are even found to form naturally during graphite growth, so they don't require complicated configuration or assembly. The researchers believe it should be possible to isolate graphene coil formations from crystals of graphitic carbon (graphene in bulk form), but enticing graphene sheets to grow in a spiral would allow for better control of its properties.

The graphene nano-solenoids analyzed through computer models at Rice should be capable of producing powerful magnetic fields of about 1 tesla, about the same as the coils found in typical loudspeakers. Since graphene has no energy band gap, electricity should move through without any barriers. But in fact, the width of the spiral and the configuration of the edges – either armchair or zigzag – influences how the current is distributed, and thus its inductive properties.

The researchers explain that while spiral inductors on silicon occupy excessive area, graphene nano-solenoids, If realized, could help get rid of this burden and assist in miniaturizing electronics. It was found that the magnetic field would be strongest in the hollow, nanometer-wide cavity at the spiral’s center. They demonstrated theoretically how energy would flow through the hexagons in nano-solenoids with edges in either armchair or zigzag formations. In one case, they determined the performance of a conventional spiral inductor of 205 microns in diameter could be matched by a nano-solenoid 70 nanometers wide – nearly 10,000,000 times smaller.