» Graphene membranes to aid in cleaning nuclear waste and...

Researchers at the University of Manchester have demonstrated that graphene can simplify the production of heavy water and help clean nuclear waste by filtering different isotopes of hydrogen. The process could assist in producing heavy water for nuclear power plants with ten times less energy, making it simpler and cheaper. 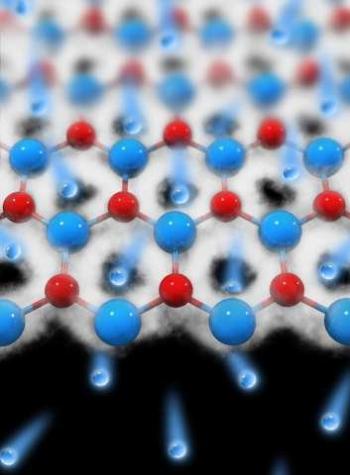 Membranes made from graphene can act as a sieve, separating protons – nuclei of hydrogen – from heavier nuclei of hydrogen isotope deuterium. Deuterium is in wide use in analytical and chemical tracing technologies and, also, as heavy water required in thousands of tons for operation of nuclear power stations. The heaviest isotope, tritium, is radioactive and needs to be safely removed as a by-product of electricity generation at nuclear fission plants. Future nuclear technology is based on fusion of the two heavy isotopes.

The researchers tested whether deuterons – nuclei of deuterium – can pass through graphene and boron nitride. They found that deuterons were not only effectively sieved out by the one atom thick membranes, but were sieved with high separation efficiency. The researchers referred to this as the first membrane shown to distinguish between subatomic particles, all at room temperature.

Furthermore, the researchers showed that the separation is fully scalable. Using CVDrela graphene, they built centimeter-sized devices to effectively pump out hydrogen from a mixture of deuterium and hydrogen.