Researchers at the Massachusetts Institute of Technology have discovered that graphene sheets could be used to make chips up to a million times faster. The researchers found that slowing the speed of light to the extent that it moves slower than flowing electrons can create an "optical boom", the optical equivalent of a sonic boom. 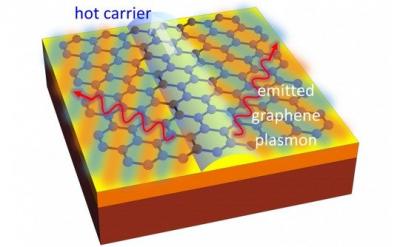 The researchers managed the complicated task of slowing the speed of light by using the honeycomb shape of carbon to slow photons to several hundredths of their normal speed in a free space. Meanwhile, the characteristics of graphene speed up electrons to a million meters a second, or around 1/300 of the speed of light in a vacuum. The optical boom is caused when the electrons passing though the graphene reach the speed of light, effectively breaking its barrier in the carbon honeycomb and causing a shockwave of light.

As electrons move faster than the trapped light, they bleed plasmons, a form of virtual particle that represents the oscillation of electrons on the graphene’s surface. Effectively, it is the equivalent of turning electricity into light. This can efficiently and controllably generate plasmons at a scale that works with microchip technology. The discovery could allow chip components to be made from graphene to enable the creation of light-based circuits. These circuits could be the next step in the evolution of chip and computing technology, as the transfer of data through light is far faster than using electrons in today's chips, even the fast pixel-pushing ones.

The team explains that “there’s a lot of excitement about graphene because it could be easily integrated with other electronics,” and the researchers are also confident that MIT can turn this theoretical experiment into a working system “within one to two years.”