Researchers from CNR-Istituto Nanoscienze, Italy and the University of Cambridge, UK, associated with the ​Graphene Flagship, have shown that it is possible to create a terahertz saturable absorber using graphene, produced by liquid phase exfoliation and deposited by transfer coating and ink jet printing. The paper reports a terahertz saturable absorber with an order of magnitude higher absorption modulation than other devices produced to date. 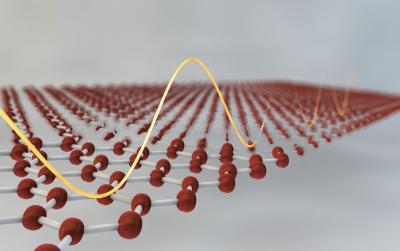 A terahertz saturable absorber decreases its absorption of light in the terahertz range (far infrared) with increasing light intensity and has great potential for the development of terahertz lasers, with applications in spectroscopy and imaging. These high-modulation, mode-locked lasers open up many prospects in applications where short time scale excitation of specific transitions are important, such as time-resolved spectroscopy of gasses and molecules, quantum information or ultra-high speed communication.

“We started working on saturable terahertz absorbers to solve the problem of producing a miniaturized mode-locked terahertz laser with thin and flexible integrated components that also had good modulation” said the Graphene Flagship from CNR-Istituto Nanoscienze in Italy.

Graphene is promising for applications like saturable absorbers because it has intrinsic broadband operations and ultrafast recovery time along with an ease of fabrication and integration, as first demonstrated in ultra-fast infra-red lasers by Flagship partner University of Cambridge. In the terahertz range, the present work exploits graphene produced by liquid phase exfoliation, a method ideally suited to mass production, to prepare inks, easily deposited by transfer coating or ink jet printing

“It was important to us to use a type of graphene that could be integrated into the laser system with flexibility and control”, said the researchers, “Ink jet printing along with transfer coating achieved that.”

Using mode-locked lasers to produce ultra fast pulses in the terahertz range can have interesting and exciting uses. “These devices could have applications in medical diagnostics when time of flight topography is of importance – you could see a tumour inside a tissue”.