Researchers at the University of Lisbon's Centro de Química Estrutural have discovered that the addition of graphene to the working fluid of solar collectors helps to regain some of its lost efficiency. Solar thermal collectors are seen as a simple and inexpensive way to make use of solar energy. Pure water is an efficient heat-transfer fluid, but it must be mixed with antifreeze to prevent damage to pipes during freezing conditions, and this lowers its performance. 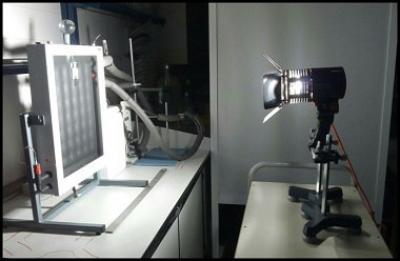 The properties of an ideal heat-transfer fluid in a solar collector include a high thermal capacity and a freezing point outside of the temperature range likely to be encountered. Unfortunately, in the case of water, satisfying the latter requirement means compromising on the former, as mixing water with antifreeze makes it a less effective carrier of heat.

To counter this effect, the researchers turned to a graphene for its exceptional thermal conductivity. Using a mixture of water and ethylene glycol, the team tested the effect of varying quantities of graphene flakes on the heat-transfer efficiency of the working fluid. The researchers performed experiments indoors under the controlled warmth of a halogen lamp, and outside under the Sun, where clouds and wind contributed real-world unpredictability to the system.

The greatest performance increase was seen for the largest quantity of graphene tested, when the nanomaterial made up 0.1% of the fluid by weight. Used in the Sun-warmed experiment, this led to a heat-transfer efficiency of 61%, compared to 55% for the graphene-free fluid. The addition of yet more graphene might be expected to improve heat transfer further, but as the proportion increases the fluid becomes more viscous and harder to pump.