Researchers at Stanford University have developed a revolutionary graphene-enhanced polyethylene film that prevents a lithium-ion battery from overheating, then restarts the battery when it cools. This new technology could prevent fires and melt-downs in a wide range of battery-powered devices. 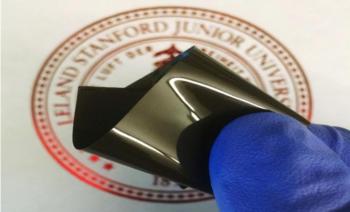 The researchers in this study recently invented a wearable sensor to monitor human body temperature, made of a plastic material embedded with tiny particles of nickel with nanoscale spikes protruding from their surface. For the battery experiment, they coated the spiky nickel particles with graphene and embedded the particles in a thin film of elastic polyethylene. They then attached the film to one of the battery electrodes so that an electric current could flow through it. The researchers explain that in order to conduct electricity, the spiky particles have to physically touch one another, but during thermal expansion, polyethylene stretches. That causes the particles to spread apart, making the film non-conductive so that electricity can no longer flow through the battery.

It is even possible to tune the temperature higher or lower depending on how many particles are put in or what type of polymer materials are chosen,so that the battery will shut down at 50 C or 100 C, for example.

A typical lithium-ion battery consists of two electrodes and a liquid electrolyte that carries charged particles between them. Damaging or overcharging the battery generates heat, and if the temperature reaches around 300 degrees Fahrenheit (150 degrees Celsius), the electrolyte could catch fire and trigger an explosion. Several previous techniques have been used to prevent battery fires, such as adding flame retardants to the electrolyte, but unlike the results of this study, these are irreversible, so the battery is no longer functional after it overheats.

An interesting development as to temperature responsive current limiter, but one would need to factor in the resistance of such a device as to creating inefficiencies of power draw when the battery is not overheated.