Graphene Flagship researchers have developed a graphene-based optical fibre laser that emits pulses with durations equivalent to just a few wavelengths of the light used. This is said to be the fastest device ever created, and should be ideal for use in ultrafast spectroscopy, as well as in surgical lasers that avoid heat damage to living tissue. 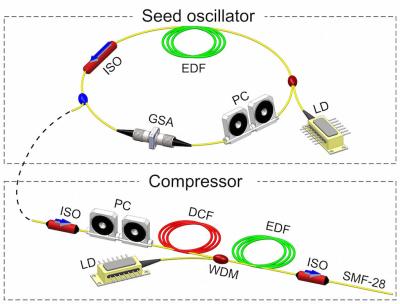 Time resolution is limited by the length of the laser pulse used. The shorter the pulse, the higher the spectroscopic resolution, with the highest possible resolution defined by the cycle length of the particular light frequency employed. In the visible and near-infrared regimes, in which most ultrafast lasers operate, the ultimate pulse duration is between 2 and 5 femtoseconds. Shorter pulses require shorter wavelengths. Pulses as short as two cycles can be generated from laser cavities using a technique known as passive mode-locking.Graphene-based mode-locked lasers have been demonstrated before, but study is unique in its compact, all-fibre setup. All-fibre formats are preferable in terms of cost, compactness and robustness, and the strategy here is to use a cavity based on alternating segments of positive and negative dispersion fibres that lead to periodic broadening and compression of the pulses. The Graphene Flagship researchers' setup was based only on standard telecommunications equipment, with a saturable absorber based on a composite of graphene and polyvinyl alcohol (PVA) fabricated by low-cost solution processing, with the graphene flakes exfoliated from bulk graphite by ultrasonic agitation of the solution. Evaporation leaves behind a 50 micron-thick graphene-PVA composite, which is then sandwiched between fibre connectors.

This setup enabled the generation of 29 femtosecond pulses, which corresponds to fewer than six cycles at a wavelength of 1.5 microns. Compensating for higher-order nonlinear and dispersive effects should lead to a shorter pulse length, and the use of a higher power diode, or a double-pumped configuration, could result in higher bandwidth pulses as well as increased output power. Finally, the addition of photonic crystal fibres could in principle allow for the generation of similarly short laser pulses at other wavelengths.