A team of scientists from Columbia, Seoul National University (SNU), and Korea Research Institute of Standards and Science (KRISS) reported the creation of an on-chip visible light source using graphene as a filament. Creating light in small structures on the surface of a chip is crucial for developing fully integrated 'photonic' circuits that do with light what is now done with electric currents in semiconductor integrated circuits. 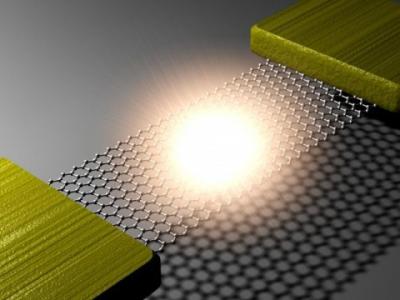 The scientists attached small strips of graphene to metal electrodes, suspended the strips above the substrate, and passed a current through the filaments to cause them to heat up. The team refers to this design as 'the world's thinnest light bulb', a type of 'broadband' light emitter that can be integrated into chips and may pave the way towards the realization of atomically thin, flexible, and transparent displays, and graphene-based on-chip optical communications.

Previous attempts to put an incandescent light bulb onto a chip failed since light bulb filaments must be extremely hot in order to glow in the visible range and micro-scale metal wires cannot withstand such temperatures. In addition, heat transfer from the hot filament to its surroundings is extremely efficient at the microscale, making such structures impractical and leading to damage of the surrounding chip. In this study, however, the team managed to show that the graphene reached temperatures of above 2500 degrees Celsius, hot enough to glow brightly.

Graphene's transparency also allowed for the emitted light to peak at certain wavelengths, due to interference between the light emitted directly from the graphene and light reflecting off the silicon substrate and passing back through the graphene. Graphene's ability to reach high temperatures without melting the substrate or the metal electrodes is due to another interesting property: as it heats up, graphene becomes a much poorer conductor of heat. This means that the high temperatures stay confined to a small 'hot spot' in the center.

The team also demonstrated the scalability of their technique by designing large-scale arrays of CVD graphene light emitters. The scientists are currently working to further characterize the performance of these devices and to develop techniques for integrating them into flexible substrates.