» Graphene enables a system that can detect cancer cells

Researchers at the University of Illinois at Chicago have shown an interfacing system that can differentiate a single cancerous cell from a normal cell using graphene, hopefully opening the door to developing a simple, noninvasive tool for early cancer diagnosis. 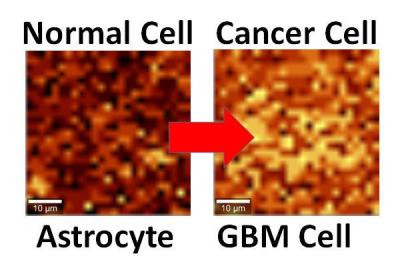 The team explains that this graphene system is able to detect the level of activity of an interfaced cell. The cell's interface with graphene rearranges the charge distribution in graphene, which modifies the energy of atomic vibration as detected by Raman spectroscopy. The atomic vibration energy in graphene's structure differs depending on whether it's in contact with a cancer cell or a normal cell, because the cancer cell's hyperactivity leads to a higher negative charge on its surface and the release of more protons.The electric field around the cell pushes away electrons in graphene's electron cloud, changing the vibration energy of the carbon atoms. The change in vibration energy can be detected by Raman mapping, allowing characterization of the activity of a single cell.

The technique is now being studied in a mouse model of cancer, with results that are "very promising," according to the researchers. Experiments with patient biopsies would be further down the road. The team further states that using this technique on a patient with a brain tumor could help see if the tumor relapses, using a cell sample to interface with graphene and look to see if cancer cells are still present. The same technique may also work to differentiate between other types of cells or the activity of cells.

Earlier this year, the team introduced nanoscale ripples in graphene, causing it to conduct differently in perpendicular directions, useful for electronics. They reportedly took this earlier work and used it for this current study. "Instead of laying graphene on cells, we laid cells on graphene and studied graphene's atomic vibrations."