a collaboration of European scientists focused on the idea that even massive particles can behave like waves, as if they could be in several places at once. This phenomenon is typically proven in the diffraction of a matter wave at a grating. The scientists observed the delocalization of molecules at the thinnest possible graphene-based grating. 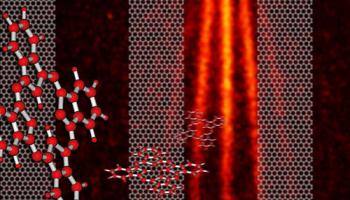 The quantum mechanical wave nature of matter is the basis for a number of modern technologies like high resolution electron microscopy, neutron-based studies on solid state materials or highly sensitive inertial sensors working with atoms. The research focused on how it is possible to extend such technologies to large molecules and cluster. In order to demonstrate the quantum mechanical nature of a massive object, it must be delocalized first. This is achieved by relying on Heisenberg’s uncertainty relation: If molecules are emitted from a point-like source, they start to ‘forget’ their position after a while and delocalize. If you place a grating into their way, they cannot know, not even in principle, through which slit they are flying. It is as if they traversed several slits at the same time. This results in a characteristic distribution of particles behind the grating, known as the diffraction or interference pattern.

In a European collaboration (NANOQUESTFIT) together with partners at the Israeli Tel Aviv University (where all nanomasks were written), as well as with support by groups in Germany and Austria, they now demonstrated for the first time that such gratings can be fabricated even from the thinnest conceivable membranes. They milled transmission masks into ultra-thin membranes of silicon nitride, biphenyl molecules or carbon with a focussed ion beam and analysed them with ultra-high resolution electron microscopy. The team succeeded in fabricating stable and sufficiently large gratings even in atomically thin single layer graphene.

Previous quantum experiments of the same EU collaboration used diffraction masks already as thin as a hundredth of the diameter of a hair. However, even such structures were still too thick for the diffraction of molecules composed of dozens of atoms. The challenge was to reduce the material's thickness and thus the attractive interactions of these masks down to the ultimate limit while retaining a mechanically stable structure. Using graphene, it was possible to achieve the thinnest possible diffraction masks for matter wave optics.