A team of researchers led by the Massachusetts Institute of Technology and Raytheon BBN Technologies developed a new device that can detect single photons across a wide range of the electromagnetic spectrum, from the higher energy visible to much lower energy radio frequencies. The device consists of a sheet of graphene contacted on two ends by superconductors - a configuration called a Josephson junction. 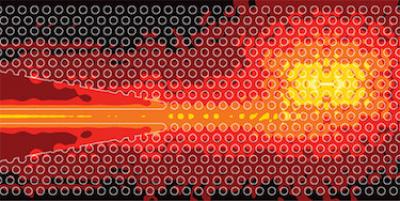 The ability to detect terahertz and microwave photons in this way could allow for observations of some of the faintest objects in the universe, say the researchers who report on the new technique, “as well as open up new opportunities in quantum information processing.”

“In the absence of photons, a supercurrent can pass through the graphene and we detect no voltage difference between the superconducting contacts,” explains the team. “When a photon is absorbed, however, the electrons in graphene heat up, blocking the supercurrent and leading to a voltage spike that we can measure.”

The device is more sensitive to low-frequency light than previous single photon detectors thanks to graphene’s unique properties. “First, graphene can absorb light at nearly any wavelength in the electromagnetic spectrum. Second, because graphene is two-dimensional, it can be easily integrated into structures that can further enhance its light absorption.” Such structures include microwave cavities for microwave photons or photonic crystal cavities for infrared photons.

“Lastly, and most importantly however, graphene has a special pseudo-relativistic electronic band structure that leaves it with very small electron state density compared to other materials,” explains the team. “Because it has so few electron states, it has an exceptionally low heat capacity, which means that it takes very little energy to raise the average temperature of the electrons.”

In their work, the researchers show that it takes just one microwave photon to double graphene’s temperature (when it starts out at cryogenic temperatures). “According to our calculations, the device can detect individual infrared photons at a rate of up to a billion times per second and microwave photons at a rate of one million times per second.” The new single photon detector could be used in astronomy as well as in quantum information processing, say the researchers. “The latter is especially promising since the best quantum computing technology to date relies on Josephson junctions, so it would be somewhat natural to couple our detector to these systems”.