A team of researchers from the École polytechnique fédérale de Lausanne (EPFL) in Switzerland claim to have captured the world's first image of light simultaneously showing both wave pattern and particle energy attributes. 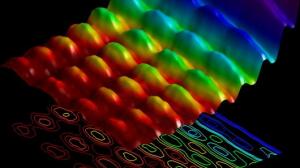 The scientists used extremely short pulses of laser light directed at a miniscule nanowire made of silver and suspended on graphene film that acted as an electrical isolator (or metal-graphene dielectric). The nanowire acted as a small antenna that generated radiation patterns with the received laser excitation. The light traveled along the wire in two opposite directions and when these waves bounced back to the middle, they intersected with each other to form a new wave that appeared to be standing in place. This standing wave, radiating around the nanowire, then became the source of light used in the experiment.

The researchers then aimed a stream of electrons into the field generated around the nanowire, and used them to image the standing wave of light. When the electrons mixed with the restrained light contained on the nanowire they either sped up (gained energy) or slowed down (lost energy).

The team then used an imaging filter to select only those electrons that had gained energy, and focused a UTEM (ultrafast transmission electron microscopy) instrument on these to image where each of the changes in energy state occurred, thereby allowing them to visualize the standing wave and make visible the physical makeup of the wave-nature of the light.

Simultaneously, this also demonstrated the particle nature of the imaged light by demonstrating that the change in speed of the interacting electrons and photons shows as an exchange of energy "packets" between the electrons and the photons. This demonstrated that the light on the nanowire was also behaving as particles.

The team also believes that this experiment not only illustrates the physical observation of the wave/particle duality of light, but it is another step toward the realization of light-based quantum devices and future technologies.