» Graphene can filter electrons according to the...

Researchers from MIT discovered that under a powerful magnetic field and at very low temperatures, graphene can filter electrons according to the direction of their spin. This is something that cannot be done by any conventional electronic system - and may make graphene very useful for quantum computing. 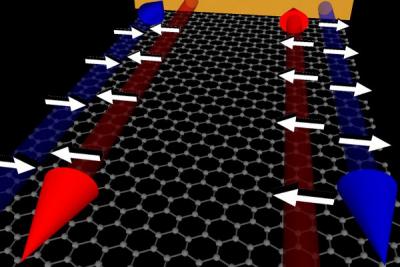 It is known that when a magnetic field is turned on perpendicular to a graphene flake, current flows only along the edge, and in one direction (clockwise or counterclockwise, depending on the magnetic field orientation), while the bulk graphene sheet remains insulating. This is called the Quantum Hall effect.

But in their new work, the researchers applied a second powerful magnetic field, in the same plane as the graphene flake. They found out that electrons that have one kind of spin move clockwise while those with the opposite spin move counterclockwise. In addition, by varying the magnetic field, you can switch these edge states on and off - and perhaps create transistors and circuits.

In their work, the researchers applied a very strong magnetic field - 35 Tesla strong, in fact, about 10 times stronger than an MRI machine. The experiments also required a temperature of 0.3 degrees Celsius above absolute zero. The researchers are now looking at ways to observe the same effect in a weaker magnetic field and at a higher temperature.