Scientists from the Moscow Institute of Physics and Technology (MIPT), the Institute of Physics and Technology RAS, and Tohoku University (Japan) have developed a new type of graphene-based transistor and using modelling they have demonstrated that it has ultralow power consumption compared with other similar transistor devices. Reducing power consumption enables the clock speed of processors to be increased, according to calculations, to as high as two orders of magnitude, since the electronic components heat up less. 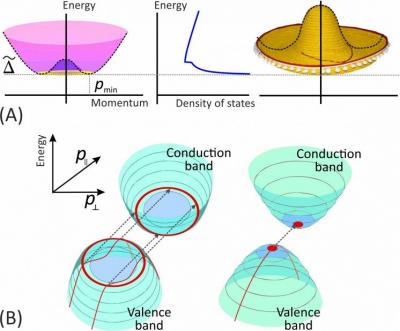 The team involved in this study proposed a new design for a tunnel transistor based on bilayer graphene, and using modelling, they proved that this material is an ideal platform for low-voltage electronics. Bilayer graphene is two sheets of graphene that are attached to one another with ordinary covalent bonds. Due to the unique structure of its electronic bands, it is a highly promising material for low-voltage tunneling switches. Bands of bilayer graphene are in the shape of a “Mexican hat”. It turns out that the density of electrons that can occupy spaces close to the edges of the “Mexican hat” leans toward infinity – this is called a van Hove singularity. With the application of even a very small voltage to the gate of a transistor, a huge number of electrons at the edges of the “Mexican hat” begin to tunnel at the same time. This causes a sharp change in current from the application of a small voltage, and this low voltage is the reason for the record low power consumption.

The researchers point out that until recently, van Hove singularity was barely noticeable in bilayer graphene – the edges of the “Mexican hat” were indistinct due to the low quality of the samples. Modern graphene samples on hexagonal boron nitride (hBN) substrates are of much better quality, and pronounced van Hove singularities have been experimentally confirmed in the samples using scanning probe microscopy and infrared absorption spectroscopy.

An important feature of the proposed transistor is the use of “electrical doping” to create a tunneling p-n junction. The complex process of chemical doping, which is required when building transistors on three-dimensional semiconductors, is not needed for bilayer graphene. Under optimum conditions, a graphene transistor can change the current in a circuit ten thousand times with a gate voltage swing of only 150 millivolts.

“This means that the transistor requires less energy for switching, chips will require less energy, less heat will be generated, less powerful cooling systems will be needed, and clock speeds can be increased without the worry that the excess heat will destroy the chip,” says the team.