Graphene Manufacturing Group (GMG) has formalized its support to Queensland University of Technology – Centre for Biomedical Technologies (“CBT”) for the development of Piezo-Supercapacitors for Self-Powered Medical Implants through a pilot project agreement. The Agreement details GMG’s contribution of expertise and graphene for the project. 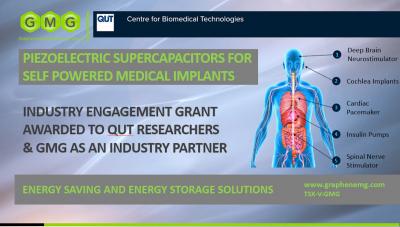 Most modern electrical medical implants actively regulate or replace bodily functions, and thus require batteries capable of reliably functioning for many years without failure. Implanted batteries typically require secondary surgeries for replacement, incurring significant inconvenience to patients in the forms of high costs, discomfort, and the risk of infection.

This project aims to develop a capability for self-charging medical implants by engineering a novel power unit called a “Piezo-Supercapacitor”, which can harvest human body-motions, converting that energy into electricity and store it, in a single unit. The concept is based on a mechanism that hybridizes the two processes into one, where the mechanical energy is directly converted and simultaneously stored as electrochemical energy without going through the intermediate step of converting into electricity.