First Graphene has announced that, together with Steel Blue, it has manufactured prototype sets of safety boots incorporating PureGRAPH10. 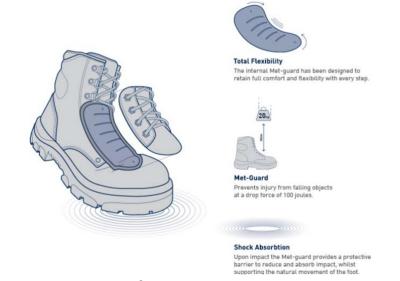 Full boots and the sole samples will be exposed to extensive laboratory tests which are expected by the Companies to exceed current industry standards for safety footwear. Following laboratory testing it is anticipated extensive field trials will be conducted, for approximately six months.

Steel Blue safety boot properties are being enhanced by PureGRAPH in the Metatarsal Guard (Steel Blue’s Met-Guard), which is specially designed to protect the metatarsal area of the foot that extends from the toes. This is a popular choice for mining workers, factory hands and drillers, who often need the extra protection the Met-Guard affords.