» Epoxy-graphene nanocomposites can be improved with...

Researchers from Beihang University in China, Imperial College London in the UK, University of Wollongong in Australia and Weizmann Institute of Science in Israel have addressed the issue of aggregation in epoxy-graphene nanocomposites, that damages the materials' performance. 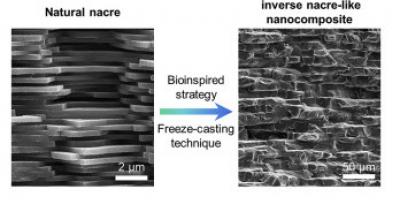 eft: Natural nacre. Right: Inverse nacre-like epoxy-graphene layered nanocomposites. (Image taken from Nanowerk)
The researchers report that they have successfully tackled this dispersion problem by constructing a continuous graphene-based scaffold. The results reportedly show that the team's novel strategy boosts the fracture toughness to about 3.6 times that of pure epoxy.
The scientists' approach for this composite toughening mechanism was inspired by natural nacre, the pearly internal layer of many mollusc shells. It has evolved through millions of years to a level of optimization currently achieved in very few engineered composites. Nacre has a layered structure composed of approximately 96 wt% calcium carbonate (CaCO3) nanoscale building blocks interfaced by about 4 wt% organic materials (soft biopolymers). The typical characteristic of nacre is the 'brick and mortar' arrangement, which is thought to be crucial to mechanical and other outstanding properties that nacre possesses.
"Our hypothesis was that nacre could provide a new design concept for constructing epoxy nanocomposites with high fracture toughness," Qunfeng Cheng, a professor at Beihang University in Beijing, who led this work, said. "In our work, we put forward the concept of inverse nacre-like layered epoxy-graphene nanocomposites composed of ∼99 wt% organic epoxy matrix".
As opposed to the conventional homogeneous mixing, the team's design strategy avoids the dispersion process of graphene nanosheets altogether. Instead, they use graphene nanosheets to construct a layered scaffold and then embed this scaffold into the epoxy matrix.
The researchers fabricated this graphene-based layered scaffold via the ice-templating technique and then infiltrated the epoxy resin into the scaffold, thereby obtaining a layered graphene nanocomposite.
"We were surprised that with only ∼0.3 wt% graphene-based scaffold, the fracture toughness is boosted to ∼2.53 MPa m1/2, which is ∼3.6 times that of pure epoxy," Cheng points out. "Constructing an interconnected conductive network within the insulating epoxy matrix is also effective in achieving excellent electrical conductivities compared with homogeneous blending. This conductivity, for instance, could be used for self-monitoring the structural safety and health of these nanocomposites."
However, the team warns that there are two key problems still left to be solved. Firstly, the inverse nacre-like layered epoxy-graphene nanocomposites demonstrated in this work are still limited to very small sizes. In order to be useful for practical applications, the large-scale fabrication of graphene-based scaffold via ice-templating needs to be developed in order to obtain large-size inverse nacre-like epoxy-graphene nanocomposites.
Secondly, the inverse nacre-like structure needs to be further optimized, especially with regard to controlling the thickness of each epoxy layer so that they more closely resemble the CaCO3 nanoplatelets in natural nacre. With decreased thickness of the epoxy layers, it is expected that the density of the interface increases to facilitate the extrinsic toughening mechanism and further boost the fracture toughness.
"Given the extraordinary electrical or thermal conductivity of graphene, a further design challenge for us is to integrate these functions with the mechanical properties of these nanocomposites in order to obtain multifunctionality," Cheng concludes.
Source:
Matter
Nanowerk