Researchers at the Georgia Institute of Technology used carbon atoms deposited on graphene with a focused electron beam process, to demonstrate a technique for creating dynamic patterns on graphene surfaces. The patterns could be used to make reconfigurable electronic circuits, which evolve over a period of hours before ultimately disappearing into a new electronic state of the graphene. 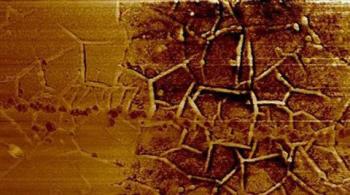 Beyond allowing fabrication of disappearing circuits, the technology could be used as a form of timed release in which the dissipation of the carbon patterns could control other processes, such as the release of biomolecules.

The researchers were initially surprised to discover that their newly-formed patterns disappeared over time. They used electronic measurements and atomic force microscopy to confirm that the carbon patterns had moved on the graphene surface to ultimately form a uniform coverage over an entire graphene surface. The change usually occurs over tens of hours, and ultimately converts positively-charged (p-doped) surface regions to surfaces with a uniformly negative charge (n-doped) while forming an intermediate p-n junction domain in the course of this evolution.

Since graphene consists of carbon atoms, when patterns are deposited on the surface with ordinary carbon atoms, they begin slowly migrating over the graphene surface. The speed at which the atoms move around can be adjusted by varying the temperature or by fabricating structures that direct the movement of the atoms. The carbon atoms can also be “frozen” into a fixed pattern by using a laser to convert them to graphite.

Beyond the potential security applications for disappearing circuits, the scientists see the possibility of simplified control mechanisms that would use the diffusing patterns to turn processes off at preset intervals. The technique might also be used to time the release of pharmaceuticals or other biomedical processes. It is important to note, however, that the scientists have so far only shown the ability to create simple patterns of charged domains in the graphene. Their next step will be to use their p-n junctions to create devices that would operate for specific periods of time.