» Covetics - a new hybrid that fuses carbon and metal in...

Covetics is a new hybrid made from high-strength carbon and metal, and it is the first bonded nanocarbon-metal material with significantly enhanced properties that can survive repeated melting cycles. Silver-based covetics were found to respond to physical and mechanical loadings in a superior way than polymers or metals. Covetics can improve thermal and electrical conductivity and yield strength and resist corrosion and oxidation. 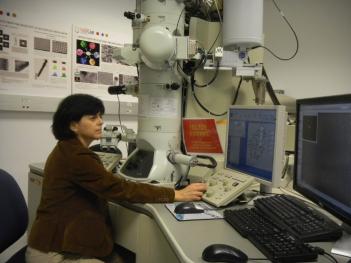 A company called Third Millennium Materials (or TM²) was established in the US to commercialize this new material, invented by the company's founders. The company was awarded five patents to date, including one in early 2013 for the metal-carbon composition and the invention of silver covetic. The company filed 15 patents for 15 different Covetics metal elements.

The first time that carbon presence in Covetics was confirmed was in 2007 using Transmission Electron Microscopy. Later on, Dr. Lourdes Salamanca-Riba from University of Maryland started to research this material, trying to understand the exact form of carbon in Covetics. The carbon was not visible, which led her to believe that the carbon somehow bonded into the lattice structure of the metal.

When Dr. Salamanca-Riba decided to focus on Silver as the host Covetics material, she finally managed to detect graphene-like carbon, amorphous carbon and other structures. She explains that Silver was chosen because it has fewer contaminants than copper, the previously used metal.

Covetics is a hybrid that fuses nanocarbons with metal forming bonds that are stronger than graphene's sp2 bonds. To create these new materials, co-inventors Jason Shugart and Roger Scherer from Third Millennium Materials developed a new method of carbon catalyzation which uses molten metal and metal alloys as an ionizing medium. Nanocarbon structures form in-situ while bonding to the metal ionizing medium. Initial testing revealed that covetics responded to physical deformation more like polymers than metals. In addition Shugart and Scherer found they could control the chemical reaction and the ingredients to tailor covetics to end-use applications.

In testing, Covetic materials have demonstrated the ability to withstand more than 1,500 degrees Celsius under an oxygen plasma lance without separation of carbon and metals. Because covetics are carbon compounds that use different metals, potential users will have to gain an understanding of carbon and its effect on the properties and behavior of the material. 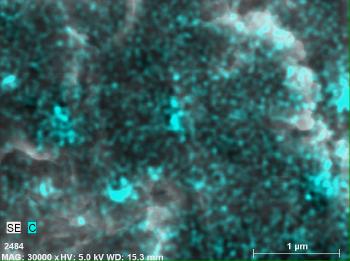 SEM image of a Covetics Hybrid

Dr. Salamanca-Riba continues her work with Covetics, focusing on understanding the role of nanocarbons on the structure and properties of metals, how the bonding process between carbon and metal occurs and discover the mechanism that makes the bond so strong. Testing and application work with the military have already demonstrated the hybrid's ability to improve thermal and electrical conductivity and yield strength and resist corrosion and oxidation.