Chinese researchers have reportedly developed a simple "one-step method" for fabricating micro-supercapacitors and demonstrated that the final devices exhibit a very good overall performance, including a high power density (1500 mW/cm3) as well as an energy density (11.6 mWh/cm3) that is at least twice as high as similar micro-supercapacitors. 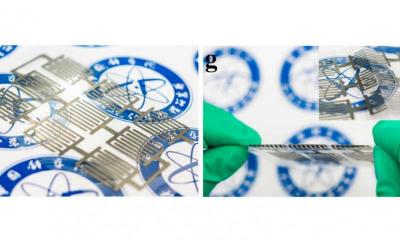 An important step in fabricating these new micro-supercapacitor is integrating phosphorene nanosheets into the interlayer of graphene nanosheets, and the good performance is in large part due to the synergistic combination of these two materials. The different materials have complementary effects, with the phosphorene offering a high storage capacity and preventing the graphene sheets from unwanted stacking, while the graphene forms the main skeleton and offers a high-speed electron transport network.

Among their other characteristics, the micro-supercapacitors are said to demonstrate very good flexibility, which the researchers attribute to the layered structure and planar device geometry. The device also has a high capacitance, which is maintained at nearly 90% of its maximum capacity after 2000 cycles. In general, the simple fabrication process also contributes to improving the device performance because it avoids the contamination and oxidation that often occur during multiple-step processing.

The researchers expect that, in the future, the new fabrication process can be easily scaled up and eventually be used for commercial purposes. They also plan to investigate other materials and techniques for developing microscale energy storage systems.